How to study deforestation in GRASS GIS

We want to study deforestation in the state of Georgia. We will use the National Land Cover Database (NLCD) provided by the Multi-Resolution Land Characteristics (MRLC) Consortium. Our objective is to

We can download the following land cover data sets and Georgia counties shapefile:

Remember that locations in GRASS can only have one projection. However, it is very rare that different data products we download from different providers are all in the same projection. What it means is that we most likely need to create multiple locations even for the same study. It can be sometimes very challenging to deal with different projections in GRASS because we have to know the projection of each data product we try to import. Without this information, we just cannot create a new location for the data. We can use some external utilities to figure out data projections, but GRASS also provides useful modules. To use these GRASS modules, we have to execute GRASS first obviously, but in what projection? The most basic and simplest projection in GRASS is the XY projection, which is not really any projection at all. This projection does not perform any coordinate transforms when importing/exporting data. However, we can use a location in the XY projection to access GRASS modules. 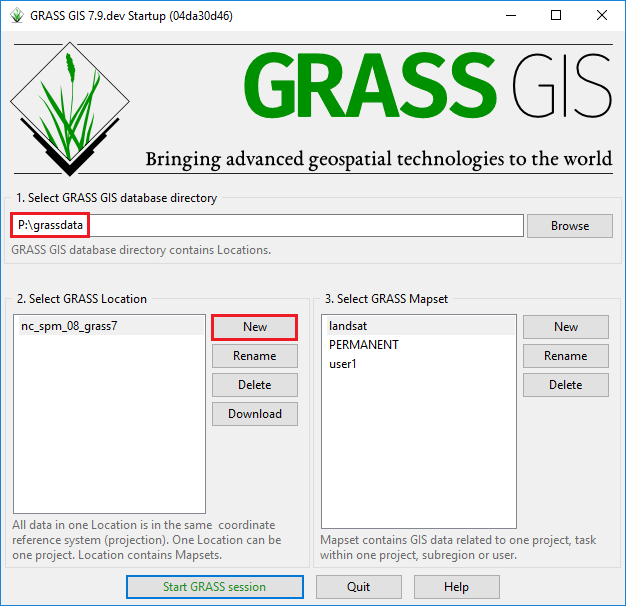 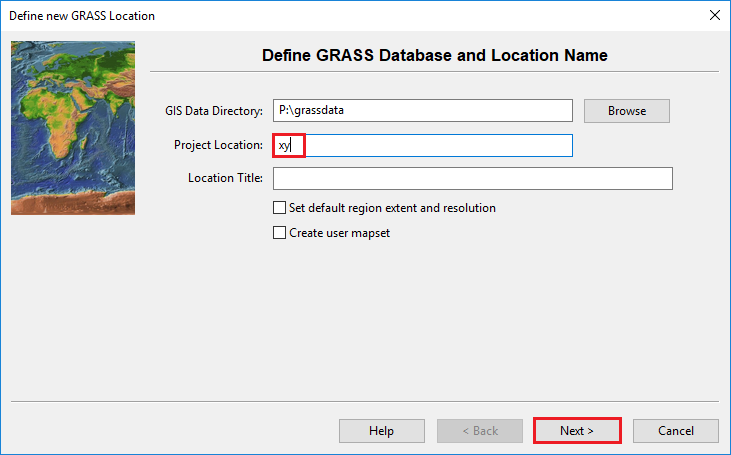 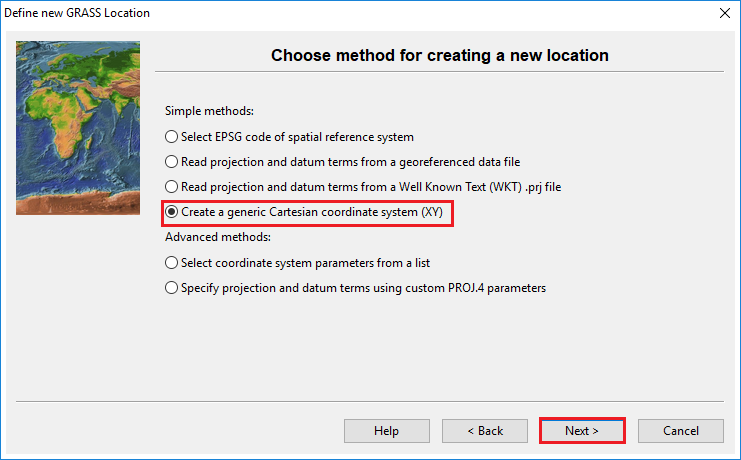 3   Figuring out the projection of the NLCD data sets

Any data providers should provide metadata about their data. NLCD data sets also come with XML metadata files. For example, for the 2001 NLCD data, we can find NLCD_2001_Land_Cover_L48.xml. The <spref> tag in this metadata file is what we need. NLCD uses its own custom projection. This search will give a list of spatial references that mention NLCD. All these spatial references use the Geodetic Reference System 1980 (GRS80) ellipsoid, but I found that NLCD has recently (not sure when) changed the ellipsoid from GRS80 to the World Geodetic System 1984 (WGS84). These two ellipsoids are almost identical, but they are different. To import NLCD data, we need to create a new location in the Albers Conical Equal Area projection with the WGS84 ellipsoid. There are some more details in the metadata file. We have two options: (1) manually construct projection parameters for GRASS or (2) use a GRASS module to create a new location in the NLCD projection. Which method do I prefer? Well... option (2) of course unless I know I already have a location in the same projection.

There are three important modules in GRASS that can import raster data:

Since the NLCD data sets we downloaded are huge (40 GB uncompressed), we just want to create links to these files using r.external and extract the Georgia area later for our study. Both r.in.gdal and r.external provide the -j flag that checks the projection and exits. However, only r.in.gdal can create a new location using the -c flag and the projection information. We’ll check the projection first.

4   Creating a new location for the NLCD data sets

Note that we try to use an informative location name “aea-nlcd-wgs84” in the command above because some old NLCD data sets may be in GRS80.

Similarly, GRASS has three vector modules that we can use to import vector data:

Let’s check the projection of Counties_Georgia.shp.

Since v.in.ogr uses the input name for output by default, we don’t need to specify the output parameter. Again, we used an informative location name “epsg4326-latlong” instead of just “latlong” or “epsg4326.”

Now, we need to link the NLCD data sets as pseudo GRASS raster maps. For this, we need to exit the xy location and start GRASS again in the aea-nlcd-wgs84 location. Once we’re in this location, we can link the external data sources.

We used the -e flag to extend the extent of the location to each data set.

We need to import the Georgia counties map into the aea-nlcd-wgs84 location where we’ll perform most of our analysis.

9   Extracting the NLCD data sets for the state of Georgia

The CONUS NLCD data sets cover the entire Continental United States (CONUS), but our area of interest is only Georgia. We want to extract only this area to make further analysis more efficient. We can use r.mask and r.mapcalc.

We have imported all the raster and vector maps that we need for our study into the same location that can be used for any other projects as well. Now, we want to isolate these “clean” maps from other maps that we’ll create later for our analysis. This way of map organization is just my personal preference to separate out “project-specific” data from “global” data. You can name this new mapset in any way you want. By default, GRASS will suggest your user name. You may use the study name “ga-deforestation.” Create your own mapset and restart GRASS in that mapset.

Make sure to set the computational region for the new mapset.

NLCD data sets have many classes (2001 and 2016), but we’re only interested in forest area. There are three forest classes including 41, 42, and 43, but, in general, we can say any 40s classes are forest. We can either extract these classes as 1 and the other classes as 0 using r.mapcalc, or reclassify them using r.reclass. In most cases, reclassifying will be much faster than performing map algebra, so we want to use r.reclass. First, let’s reclassify the 2001 land cover map. This module expects a rule file, but we’ll just type in the console (a special filename -). The “*” symbol means the rest of cell values, so we don’t want to use it in the first line.

12   Displaying the maps together

Using the highlighted icon below, we can add multiple maps at once. 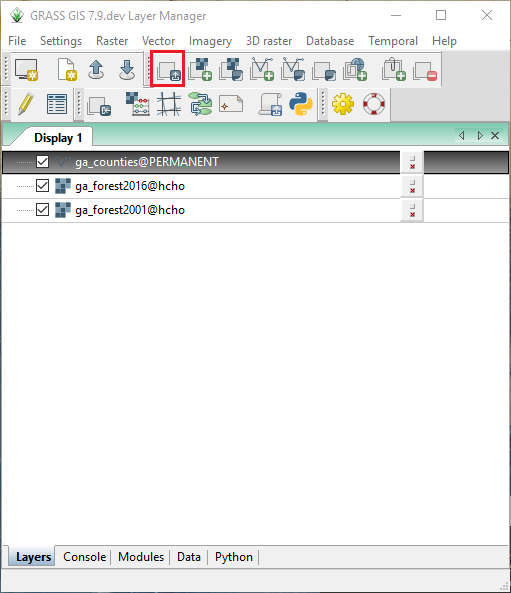 Zoom to the study area by selecting ga_counties and clicking the zoom to layer button. Go to the properties window of ga_counties, and change the feature and area fill colors to red and transparent, respectively. 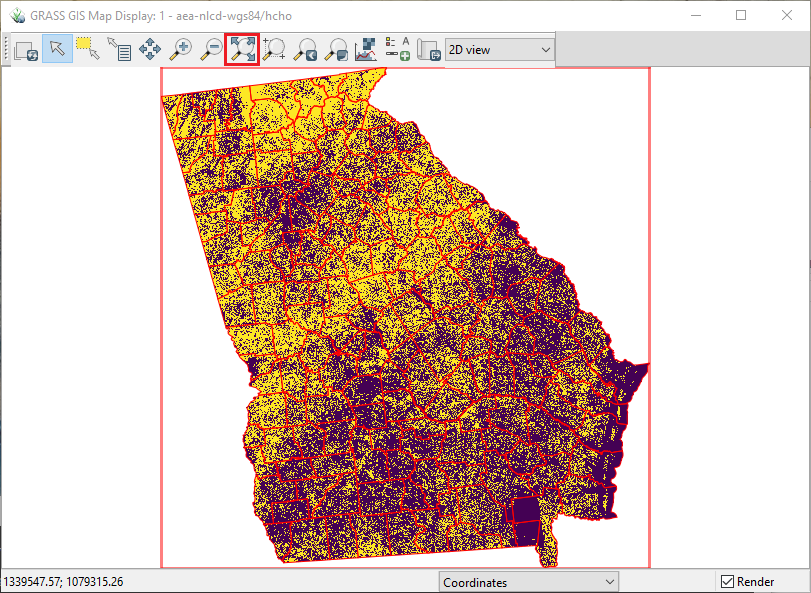 13   Calculating the average annual deforestation rate in percentage by county

13.1.1   Counting the number of forest cells by county 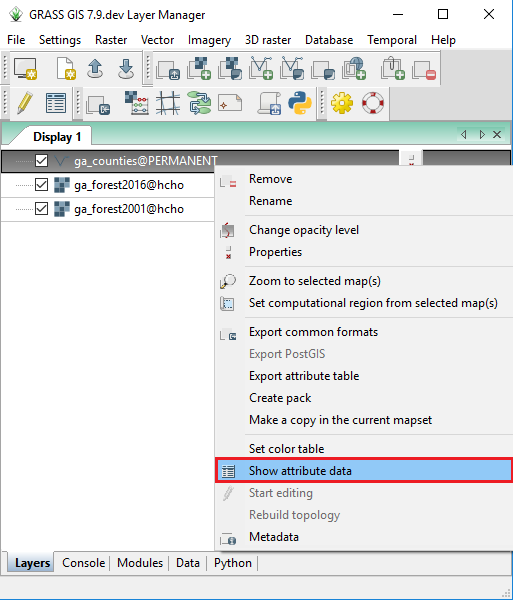 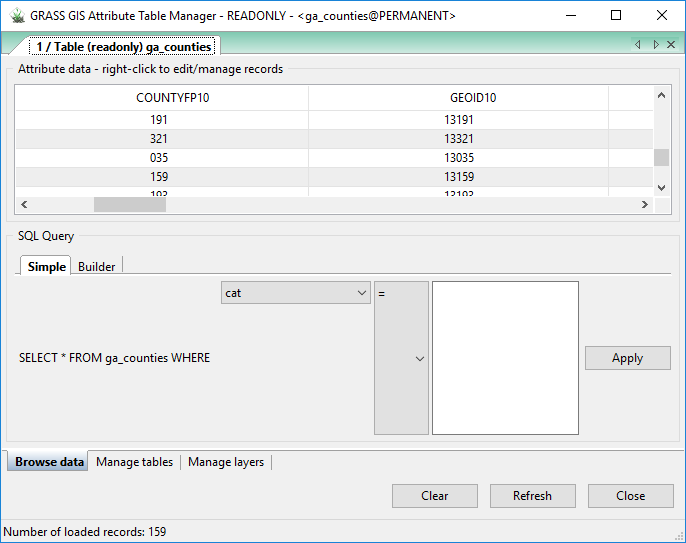 In the attribute table, we can see the COUNTYFP10 (county FIPS code) and totpop10 (total population in 2010) columns. For now, we’ll use the COUNTYFP10 column to create a base raster map.

Did it work? The module complains that the COUNTYFP10 column is not of a numeric type. County FIPS codes are actually text and raster maps cannot contain text values.

Close the PERMANENT mapset and go back to your user mapset.

We can now create a new county base map using the cofips_int column.

Using the ga_counties raster map, calculate zonal statistics using r.stats.zonal. We use the sum method because forest cells are 1 and non-forest cells are 0 in ga_forest2001 and ga_forest2016 and, by adding those cell values within each county, we can count the number of forest cells per county.

13.1.2   Calculating the forest area in square miles by county

13.1.4   Transferring the results to the Georgia vector map

For further analysis, we want to use a vector approach because it will be more efficient than raster computation. We’ll use country centroids to read raster maps and transfer cell values to ga_counties.

Now, we can join these statistics columns to ga_counties. We know that both ga_counties and ga_counties_ct share many common columns, but we’ll use cofips_int, which is unique per county.

OK, there are two linked tables (number of dblinks = 2). How do we their names?

We know it’s ga_counties_ct_1, so let’s join this table.

The raster approach can be very slow because of a high number of cells (about 271 million cells). In fact, our analysis lumps statistics per county and all those cells in each county will have the same statistics value. We can do the same statistic calculations more efficiently in the vector format.

13.2.1   Counting the number of forest cells by county

In this command, the first ga_counties refers to the existing map in PERMANENT and the latter to a new map that will be created in the current mapset.

13.2.2   Calculating the forest area in square miles by county

Add new columns to store the forest area and calculate these columns.

For this calculation, let’s add a new column again and calculate the per-capita deforestation rate in square miles per year per person.

This command will give you the worst county in terms of the deforestation rate, which is Brantley County.

This command will give you the best county in terms of the deforestation rate, which is Irwin County.

Similarly, the following two commands will give you the worst and best counties in terms of deforestation per capita, which are Clinch and Taliaferro Counties, respectively.

How many counties are worse than the statewide average in percentage?

How many are better than the statewide average in percentage?

There are total 159 counties in Georgia, so these two numbers add up correctly.

Similarly, how many counties are worse or better than the statewide average in square miles per capita?

To summarize our study,

This concludes the study of deforestation in Georgia. Super easier than ArcGIS Pro, right? ;-)